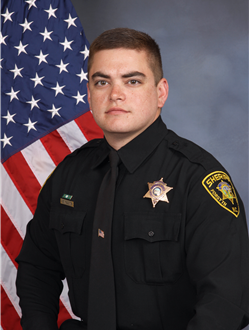 Deputy II J. Williams is assigned to the DWI Task Force. On February 1, 2018 he observed a vehicle on Highway 421 in which he believed the driver to be impaired. As Deputy II Williams followed the vehicle to further develop his opinion, the driver noticed him and began to flee before enforcement action was initiated. Deputy II Williams pursued the fleeing vehicle. He was able to obtain the vehicle registration plate number and soon learned the owner was wanted for committing armed robberies in several jurisdictions. Deputy II Williams maintained sight of the vehicle as it exited the highway and fled through Lewisville town limits and into Winston-Salem city limits. After the successful deployment of a tire deflation device by assisting deputies and a short foot pursuit, the driver of the vehicle was taken into custody. He was served with arrest warrants for armed robbery from four jurisdictions and additionally charged by the Sheriff’s Office with Felony Speeding to Elude, DWI, Hit and Run, Resisting a Public Officer and related traffic offenses.

Absent Deputy II Williams’ keen eye, this subject would have remained on the run and likely caused additional harm in our community. This action by Deputy II Williams is representative of the effort he puts forth on a regular basis. He embodies the mission of the Sheriff’s Office as he enhances the security of life and property through his proactive enforcement actions.