The Rufus W. Dalton Trust, administered by the W-S Foundation, was established by a bequest in 1983 to assist officers who are injured and the spouses and children of those who are killed in the performance of their duties. CORPORAL TIMOTHY WOOTEN is the recipient of the 2009 Award.

On September 30, 2009, at approximately 2300 hours, Corporal T.L. Wooten was fulfilling his assignment to follow behind a paving crew on Interstate 40. Corporal Wooten was operating his vehicle’s blue lights to warn approaching motorists that transportation workers were conducting road work just ahead of his vehicle. Corporal Wooten’s presence also served to protect the DOT workers unloading traffic cones on the back of a trailer and two additional workers on the ground assisting in setting up the cones. Corporal Wooten observed a car approaching him from behind at a high rate of speed. He was immediately faced with the option of either moving his vehicle to get out of the way or being struck by the fast approaching vehicle. However, knowing that his evasive action would endanger the work crew by leaving them in the path of the speeding vehicle, he remained stationary to absorb the crash impact of the approaching vehicle to protect the workers from serious injury or possible death. It was later determined that the vehicle that struck Corporal Wooten was operated by a drunk driver and traveling at a speed of approximately 60 mph.

The actions of Corporal Wooten most assuredly saved the lives of the paving crew and possibly saved others driving in this immediate area from serious injury. Corporal Wooten was out of work for approximately two weeks during which time he received extended therapy due to injuries he sustained to his back and neck. Corporal Wooten has an extensive law enforcement career of thirty-four years and has served faithfully in the Forsyth County Sheriff’s Office for a total of sixteen years. He is currently assigned to the Patrol Division. 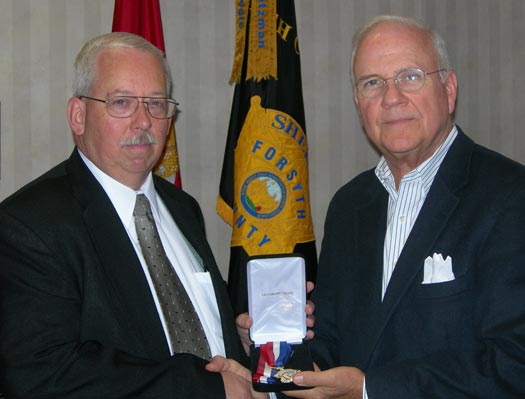