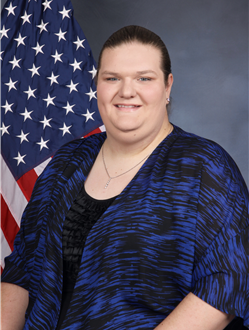 On July 24th, patrol units were dispatched on a Warrant Service in an attempt to locate a subject with an outstanding warrant for assault on female. Patrol units had attempted to serve the warrant the day before and the wanted subject ran into the woods threatening to harm himself. Due to threat of harm, the cell phone was pinged in an attempt to locate the subject. The ping was unsuccessful due to the cell phone being turned off.

On July 25th, Communications Supervisor K. Hill, who was off duty, received an update on the phone ping when the phone was turned back on and was advised the phone location was within 15 meters of the residence. Supervisor K. Hill called in the Warrant Service and also provided incident information from the night before to the Communications personnel on duty. This in turn allowed Communications personnel to notify on duty patrol units of the circumstances and coordinate their warrant service activity accordingly.

Due to her taking the initiative to check her email on her off time, the wanted subject was located and taken into custody without incident. Such actions show her dedication to teamwork within the Sheriff’s Office.